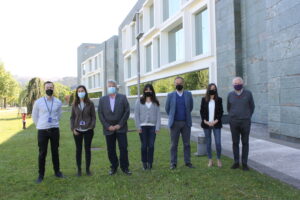 CIC bioGUNE -a member of the Basque Research & Technology Alliance, BRTA- and BIOLAN -a Basque biotechnology company- have today signed a collaboration agreement to exchange the knowledge necessary for the development, manufacture and commercialisation of a serological test in ELISA format (immunoassay techniques) for the determination of the presence of antibodies (IgG and IgM independently against SARS-CoV-2) and its emerging variants.

CIC bioGUNE will be responsible for the transfer of its own knowledge and technical assistance in the design and performance of immunoassays (ELISA), including screening and selection of the best commercial materials (such as ELISA plates, stabilisers, antibodies, etc.) for this purpose. The CIC bioGUNE team will also participate in the optimisation of immunoassays, according to the need for industrialisation, as well as in the design and execution of pilot studies and validation of serological test prototypes in ELISA format.

BIOLAN, through its division BIOLAN HEALTH, will be responsible for the industrial scale-up of the serological test in ELISA format for the detection of antibodies against SARS-CoV-2 and its variants. The biotech company will be responsible for securing and establishing the regulatory, commercial and exploitation actions for commercial use of the project results. The resulting product will reinforce BIOLAN’s contribution of solutions for the control of the pandemic derived from COVID-19, as the company has been commercialising since January a rapid serological test for the detection of neutralising antibodies against SARS-CoV-2.

The agreement was signed today by Jesús Jiménez, scientific director of CIC bioGUNE, and Larraitz Añorga, general manager of BIOLAN HEALTH. This collaboration is part of a broader agreement reached between CIC bioGUNE and BIOLAN, both located in the Bizkaia Technology Park, in areas aimed at the diagnosis of diseases and other health applications that require the analysis of proteins and compounds for use in medicine.

BIOLAN is a biotechnology-based company based in the Bizkaia Technology Park, which has become a new reference in analytical technology applied to the agri-food and health sectors, through the development of biosensors for quality control and food safety, as well as for health, for the diagnosis of diseases and monitoring of drugs and therapies.

The biosensors developed by BIOLAN represent an alternative for the resolution of current needs in the agri-food and health sector, as they are unique tools with high performance that can be applied to the monitoring of processes and products and the in vitro diagnosis of various pathologies and drug monitoring.

Due to their high precision, speed and ease of use, they offer a highly competitive solution, which is corroborated by their presence in the markets of more than 55 countries and an export rate of more than 80%.

The  CIC bioGUNE Research Centre, based in the Bizkaia Science and Technology Park, is a biomedical research organisation that carries out cutting-edge research at the interface between structural, molecular and cellular biology, with a special focus on the study of the molecular basis of disease, to be used in the development of new diagnostic methods and advanced therapies. CIC bioGUNE is recognised as a “Severo Ochoa Centre of Excellence”, the highest recognition for centres of excellence in Spain.