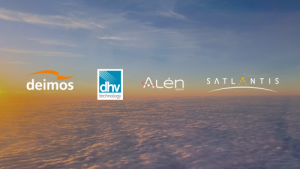 The Spanish companies Elecnor Deimos, Alén Space, DHV Technology and SATLANTIS have announced the establishment of an alliance to present a joint proposal for the development of the eight satellites with which Spain will participate in the future Atlantic Constellation.

This agreement allows the companies to coordinate their efforts and join their capabilities to respond to the needs of the Atlantic Constellation, which is one of the main actions of the PERTE Aerospace. This mission will consist of 16 satellites equipped with Earth observation and telecommunications payloads, eight of which will be developed in Spain. The constellation will be developed in collaboration with Portugal, which will be responsible for the remaining satellites, resulting in a system operated by a common operator.

The consortium formed by these four companies includes the main Spanish “New Space” companies and brings together the capabilities of other Spanish companies and universities, such as Microwave Sensors (MWSE), Sateliot (Satelio Iot Services SL) and the Universitat Politècnica de Catalunya. This alliance is open to cooperation with new partners, fully covering the areas of expertise needed for the development of the Atlantic Constellation. The agreement will maximise the expected impact on the PERTE Aerospace and develop the industrial capabilities of “New Space” in the space sector in Spain, which will enable complex developments to be addressed in limited time frames and at a moderate cost.

The main objective of the consortium is to provide a competitive response to the challenge posed by the PERTE Aerospace that not only satisfies the needs of the scientific and institutional users of the Atlantic Constellation, but also constitutes a strong basis for collaboration in Spanish industry that will allow Spain to address major opportunities in global markets.

Thanks to the complementary nature of the components of the consortium, their recognised experience in their respective fields of competence and the participation of other key players of the Spanish New Space, the alliance announced today is a decisive step towards guaranteeing the success of the Atlantic Constellation, as well as of Spanish industry and talent.