The information could be used in the future to generate measures to disable this signalling pathway, which is essential for tick survival and can therefore be used as a control measure for these parasites and the diseases they transmit.

The work, published in the journal Science, clarifies the evolutionary mechanisms in the signalling pathways that are essential for key functions of response to the environment (immune response) and post-embryonic development of ticks.

Ticks are an ancestral group of animals that can feed on a wide range of species, including primitive reptiles. This long co-evolutionary history between ticks and their different hosts has facilitated the development of communication pathways between the parasite and the animals it feeds on. 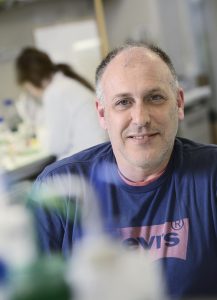 Researchers at CIC bioGUNE have described the presence of a tick molecular receptor that uses a highly conserved signalling pathway and is able to respond to signals from the host. In particular, those related to ‘danger’ signals (presence of infection), which integrate both immune signals and those related to parasite metamorphosis.

The work, published in the journal Science, clarifies the evolutionary mechanisms in signalling pathways that are essential for performing key functions in response to the environment (immune response) as well as for the post-embryonic development of ticks.

It also demonstrates the flexibility of these pathways and their ability to adapt by incorporating components that are able to add new functionalities and thus provide advantages for the survival of these parasites.

“A possible medium- to long-term goal is to use this information to generate measures that disable this signalling pathway essential for tick survival. Thus, they could be used as measures to control these parasites and, consequently, the diseases they transmit, such as Lyme borreliosis, among others,” explains Juan Anguita, an Ikerbasque researcher at CIC bioGUNE, who participated in the study.

To carry out the study, molecular biology and large-scale data extraction and analysis (omics) tools have been used, as well as other complementary methodologies. Much of the work has focused on the genetic manipulation of ticks by RNA interference microinjection, pioneered by Utpal Pal’s group at the University of Maryland, College Park.

The work is led by this group and involves the collaboration of researchers from Yale, the University of Maryland in Baltimore, the National Institutes of Health and the University of Minnesota. The collaboration with CIC bioGUNE began years ago, with a research stay in the laboratory of Utpal Pal by the then PhD student Julen Tomás Cortázar, who is now a postdoctoral fellow in Dublin, and has continued over the years with close contacts between the laboratories of Drs Anguita and Pal.