Fabrika is a giant step forward in the journey that Adegi began almost 10 years ago, on 17 January 2014, with the promotion of a new company culture, which understands organisations as shared projects based on trust.

The good news is that those ways of relating between people and teams that affect organisations can be made visible and trained.

Fabrika is a high-performance centre for the cultural transition of organisations where people and teams train to improve that culture.

To do this, we have our own method, the Fabrika Method, based on the theory of complex living systems, one of the great contributions of which is that cultural change either comes from the teams or it will not happen, and that it must go beyond the management team.

And we do this through different training programmes that the teams carry out. They work on principles of new culture such as purpose, trust, communication, participation. They start by gaining greater awareness, learning new things and thus transforming their rules of the game on a daily basis…

The Fabrika building inaugurated today is the first in the world dedicated exclusively to the cultural transition of organisations, allowing this activity to be industrialised in a place and spaces designed for it in order to do it better.

Fabrika has a built area of 4550m2, on a plot of 3450m2. The building has 5 floors. 18 rooms for use in different formats, terraces and outdoor spaces. The foundation stone was laid on 25 January 2020, the works started on 16 March 2021 and were completed in July 2022. The budget amounted to 6 million euros, with a contribution of 600,000 euros from the Provincial Council of Gipuzkoa. The building was built by Amenabar and the architect was Mikel Arrillaga.

Fabrika is a national project. Initially promoted by the companies of Gipuzkoa, it was born from the Basque Country with the vocation of being open to the world. We want it to be at the service of the country so that we can progress together, increasing the effectiveness of our companies and organisations, the wellbeing of people and achieving a better society. 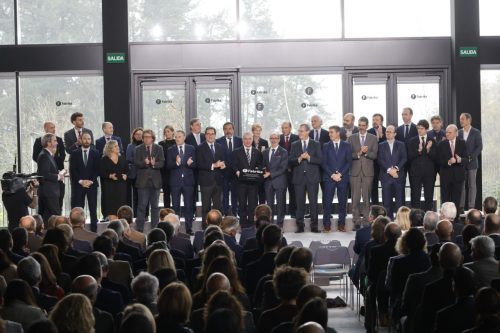 This morning Fabrika, the international high-performance centre for the cultural transition of organisations, officially opened its doors. The opening ceremony was attended by the Lehendakari Iñigo Urkullu, the president of Adegi, Eduardo Junkera, the president of the CEOE Antonio Garamendi, the president of Confebask, Isabel Busto, the Deputy General of Gipuzkoa, Markel Olano, the Minister of Economic Development, Arantxa Tapia, the Mayor of Donostia, Eneko Goia, the Government Delegate, Denis Itxaso, and the Deputy General of Bizkaia, Unai Rementeria. Also in attendance were Miguel Garrido, President of CEIM (Madrid Business Confederation) and first vice-president of CEOE, together with José Miguel Guerrero, president of Confemetal, as well as a wide representation of companies from Gipuzkoa and from different areas of Basque society.

On 17 January 2014, Adegi began to promote the new culture that understands organisations as shared projects based on trust. Just like in a rowing boat, everyone rowing together in the same direction. The Fabrika building will allow us to make the invisible visible, to move from words to deeds. From talking about New Culture to making New Culture.

In the almost five decades of its activity, Adegi has been characterised by two distinguishing features: avant-garde and generosity.

Avant-garde, because it has always been capable of imagining, creating and implementing projects that respond to the new social, economic and business challenges posed by the current situation. Adegi’s participation in the creation of Elkargi and Geroa, to give a couple of examples, is proof of this.

And generosity, because generosity means investing six million euros in the Fabrika project, with the collaboration of the Provincial Council of Gipuzkoa, which is contributing six hundred thousand euros and for which we are grateful. Generosity, because being a totally Gipuzkoan project, we are opening it up to the rest of the Basque Country, to the state, to the world… And generosity is also to contribute to the Fabrika Foundation all the knowledge we have accumulated over all these years in accompanying companies on the path towards a New Culture.

Fabrika is a high-performance centre for the cultural transition of organisations where people and teams train to improve that culture.

When Fabrika looks at organisations it sees people, who relate to each other, to do something together, and that look is focused on how they do it, how people and teams in the organisation relate to each other to do what they have to do. In each place it is done in a certain way, which is not by chance, they follow certain rules. We could call them cultural. It is company culture.

The good news is that they can be made visible and they can be trained. And if they are trained, they can be improved. Fabrika proposes that if you want to, you can improve them. And achieve better results, being better at the same time.

For this we have different training programmes for teams where we work on new culture principles such as purpose, trust, communication, participation, among others. They start by gaining greater awareness, learning new things and transforming their rules of the game on a daily basis…

Fabrika has its own method, the Fabrika Method. It is based on science, on the theory of complex living systems, from the hand of our R&D director Jose Luis Escorihuela “Ulises. One of the great contributions he has brought us is that cultural change is either made from the teams or it won’t happen. Leadership training is fine and often necessary, but never enough. The company is a system and change comes from the teams. Management teams, middle management teams, transversal teams… there is a wide variety of teams, but we cannot leave change to the leader alone.

And another great contribution is the extension to the rest of the company. Nor can we let change stay only in the management team. Because it generates a lot of frustration. For this reason, we must design a strategy to amplify the change to the rest of the organisation.

In addition to the method, the second element we have at Fabrika are the facilitators. They are a key part of the project, without them, it would not be possible.

We have opted to develop a team that does not depend on one or two people, making it bigger, with around 12 trainers to date. Some are 100% of our own staff, others are from the University of Mondragon, which is our industrial partner, and others are freelancers. They have all been trained in the same methodology, programmes and dynamics and the programmes are offered in Spanish, Basque, English, French and now we are going to reinforce them with the launch of the School of Facilitators.

First of all, for companies, regardless of location, sector, size or legal form. Let’s remember that our approach is aimed at people who are in contact with each other in order to do something together.

But we have also started to work with other publics. For example, the public administration (city council, county council, government), the educational world (primary-secondary, vocational training, university), business schools, researchers, trainers-professional coaches and soon we hope to launch activities for the general public.

Finally, Fabrika is a national project. Initially driven by the companies of Gipuzkoa and, from the Basque Country, it is born with the vocation of being open to the world. We want it to be at the service of the country so that we can progress together, increasing the effectiveness of our companies and organisations, the wellbeing of people and achieving a better society.

Albert Camus said that true generosity towards the future lies in giving everything to the present. This is what we do with Fabrika, which is what we generously give to the present to realise the desire for a better future for the country, for our society, for all of us and for the future of our sons and daughters.