The study provides the scientific community with a new tool for the study of the most frequent prion diseases in humans and the most difficult to tackle because their cause is completely unknown and they are very rare phenomena.

The research, led by Joaquín Castilla (CIC bioGUNE) and Enric Vidal (IRTA-CReSA), has been published in the journal Acta Neuropathologica Communications. 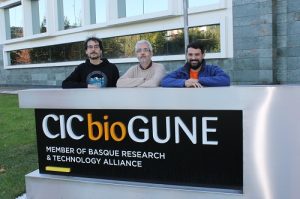 A CIC bioGUNE team has found a solution to the lack of animal models for the study of sporadic prion diseases thanks to the development and characterisation of a new transgenic mouse that consistently reproduces scrapie or atypical ovine scrapie. The model develops the disease spontaneously and is also transmissible in the same animal model and also in wild models, highlighting its ability to produce the disease also in sheep.

The study, published in the journal Acta Neuropathologica Communications, describes the first laboratory model of atypical scrapie in sheep, which, due to its similarities to human sporadic prion diseases, is very useful to study the mechanisms underlying these diseases or to evaluate, for example, the efficacy of potential therapies to combat this type of transmissible spongiform encephalopathy.

“Given the scarcity of animal models for the study of sporadic prion diseases, this study offers the entire scientific community a suitable animal model to improve understanding of this form of the disease of unknown cause. The research provides a new study tool for the most frequent prion diseases in humans and the most difficult to tackle, as the cause is completely unknown and the phenomenon is very rare in nature. This model opens up the possibility of understanding the triggers of the disease and evaluating therapies specifically aimed at preventing its appearance or slowing its progression,” says Joaquín Castilla, Ikerbasque research professor, principal investigator at CIBERINFEC and leader of the prion research group at CIC bioGUNE, which carried out the study.

This novel animal model will be applied to the study of prion diseases of idiopathic origin, also known as sporadic. In contrast to the various models developed to study infectious forms of the disease, the study of the onset and development of sporadic diseases is very limited. Thus, it is not yet known whether there is a trigger for the disease, where it starts, or how long it takes from the onset of the disease until the first clinical signs appear. This animal model could help to solve these unknowns. Moreover, given its resemblance to some human sporadic prion diseases, it will also be a useful model for improving diagnosis or testing different therapies in development.

“The model has been developed by studying in vitro various prion proteins observed in nature and assessing their ability or facility to transform into the pathogenic form. In fact, many test-tube studies have been performed up to the animal model. So, finding a prion protein with this greater-than-usual capacity for spontaneous conversion has been like looking for a needle in a haystack,” explains Hasier Eraña, another of the researchers involved in the study.

The research has been developed through the collaboration of several research groups. Mainly, the study has been promoted and developed by the Prion Research Group at CIC bioGUNE, led by Joaquín Castilla; the Spongiform Diseases Unit at the Centre de Reçerca en Sanitat Animal (CReSA-IRTA), led by Enric Vidal, and the Transgenesis Unit at the University of Salamanca, led by Manuel Sánchez-Martín. These three groups have also had the collaboration of researchers from the Centre for Encephalopathies and Emerging Communicable Diseases of the University of Zaragoza, the Animal Health Department of NEIKER, the Istituto Superiore di Sanità in Rome, the Biomedical Research Institute CIMUS in Santiago de Compostela, CISA-INIA in Madrid, INRA in France, Colorado State University and the Faculty of Veterinary Medicine of the Autonomous University of Barcelona.

Transmissible spongiform encephalopathies, or prion diseases, which are rapidly progressive neurodegenerative diseases affecting humans and other mammals, can develop by three different routes.

The best known, because it was the cause of the “mad cow” epidemic in the 1990s, is the infectious route, in which the pathogen (prion) is acquired through ingestion of tissues from animals affected by the disease. This pathogen consists of a protein abundant in neurons (cellular prion protein or PrPC) which, by unknown mechanisms, undergoes a change of three-dimensional structure or conformation. Thus, it becomes a so-called prion (or PrPSc) that exhibits neurotoxic properties and the ability to convert other PrPCs to its same aberrant structure, spreading the disease throughout the brain and causing neurodegeneration. Although the best known, this infectious form of the disease, in which the prion or PrPSc is acquired from external sources, is the rarest since the eradication of “mad cow disease”.

However, genetic and idiopathic forms of these diseases continue to occur. The former, also called hereditary, are due to mutations in the PrPC gene, which lead to its change of structure to PrPSc, thus initiating the pathological process throughout the life of individuals carrying these mutations. The genetic forms of the disease, which include genetic Creutzfeldt-Jakob disease, familial lethal insomnia and Gerstmann-Sträussler-Scheinker syndrome, currently account for approximately 15% of diagnosed prion diseases.

The most common form, accounting for 85% of cases, is sporadic or idiopathic Creutzfeldt-Jakob disease, the cause of which is unknown, but is thought to occur through a spontaneous and infrequent change in structure of the PrPC, occurring in 1 to 2 people per year per million individuals. The most common in humans, it is also the most difficult to study, as its unknown cause prevents the development of animal models of disease that faithfully reproduce it. This type of sporadic disease also exists in animals, the main one being scrapie, or atypical scrapie, which affects sheep. As with human disease, it also occurs in 1-5 individuals per million and is therefore not useful for laboratory study.