Through its specialised science and knowledge branch, the EU’s highest executive body has recognised the work and potential of the Basque centre for the development of the European battery industry

In its latest report on the state of the sector on the continent, the Commission includes the main advances and challenges of energy storage technologies, also highlighting the strategic role of projects such as Basquevolt, CIC energiGUNE’s second spin-off 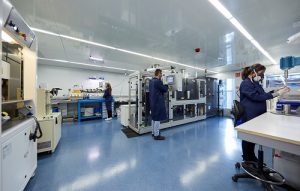 CIC energiGUNE, a leading Basque research centre in energy storage specialising in batteries, thermal energy solutions and hydrogen technologies, and a member of the Basque Research & Technology Alliance-BRTA, has been recognised as an “outstanding example” in the field of battery research and development by the European Commission’s Joint Research Centre (JRC).

In its recent report “Batteries for Energy Storage in the European Union”, the continent’s main executive body reviews the current state of the battery industry in Europe, as well as its main trends and technological challenges. In this context, the study points to CIC energiGUNE as one of the benchmark R&D centres at both national and EU level, thanks to the work carried out to date in the different branches of scientific research associated with energy storage and batteries.

In this way, the Basque centre, a strategic initiative supported by the Basque Government and the Provincial Council of Alava, has been highlighted alongside other major public institutions such as the Atomic Energy and Alternative Energies Commission (France), the National Agency for New Technologies, Energy and Sustainable Economic Development (Italy) and the Fraunhofer Gesells Alliance (Germany).

These entities are highlighted in the publication thanks to their lines of research into the innovation and development of energy storage technologies, which are expected to contribute to building a competitive European battery manufacturing industry based on the principles of clean energy and circular economy.

In fact, all of them are part of important scientific programmes such as Horizon Europe, highlighted by the Commission in its report and where CIC energiGUNE participates in different initiatives, leading some as relevant as the HELENA project, which aims to establish the development of the future generation of batteries based on solid electrolyte.
The report itself highlights this solid-state technology as one of the major future trends in the industry, together with another series of advances such as cobalt-free batteries (with NMC, NCA or NMCA cathodes) or solutions based on LFP cathodes. All of these are alternatives in which the work of CIC energiGUNE stands out.

The Commission also highlights the importance of the activity of this type of centre in the current race between Europe and other geographical areas such as North America and Asia. The latter region leads (through China, Japan and South Korea) in battery technology development and innovation through various publications and patents. Hence the importance that the study attributes to the R&D activity carried out by research centres such as CIC energiGUNE.
Basquevolt, among the key companies for the European Commission.

Beyond scientific and technological activity, the European Commission also analyses in its study the current role and future role of companies in the development of the European battery sector.

In this regard, the report highlights the implementation of initiatives of European origin, giving as an example Basquevolt, the Basque initiative for the production of solid-state batteries promoted by the Basque Government together with a consortium of companies and organisations including Iberdrola, CIE Automotive, Enagás, EIT InnoEnergy and CIC energiGUNE.

The Commission’s analysis assesses the importance of projects such as Basquevolt both because of their need to guarantee the future demand for batteries on the continent (expected to be around 1,000 GWh by 2030) and because they are initiatives based on 100% European knowledge and technology, thus reducing dependence on third regions such as Asia or North America. Basquevolt was born from the research work carried out over the last 10 years by CIC energiGUNE in the field of solid-state batteries, a technology that will play an “important role” in the future, according to the report.

In addition, the Commission also highlights the economic and strategic value of developing this type of initiative to attract new companies and suppliers to establish a solid industrial value chain around batteries and their components. Particularly with a view to developing capacities in critical stages such as the extraction of raw materials (where Europe, due to its available resources, is at a disadvantage) or the recycling and second life of batteries (aimed at compensating for this deficit of raw materials through the “circularity” of the industry).

To this end, the aim is to promote the development of strategies and lines of action that promote the use of circular materials, in order to reduce Europe’s dependence on other regions and countries. In this sense, both CIC energiGUNE and Basquevolt work in line with the “Basque Country Circular Economy Strategy 2030”, approved by the Basque Government in 2020 and which lays the foundations for the achievement of these objectives set by the EU.