A team of researchers led by David Albesa, Ikerbasque researcher at the Institute of Biophysics (CSIC-UPV/EHU), has discovered how a toxin, Tse5, produced by the bacterium Pseudomonas aeruginosa eliminates intoxicated cells.

Tse5 causes cell death in other bacteria in its environment. To achieve this, it forms ion-transporting pores, resulting in cell depolarisation.

P. aeruginosa is a major cause of pneumonia in immunocompromised patients and people with lung disease.
The research has been published in the prestigious journal Communications Biology. 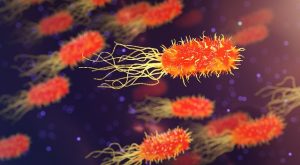 P. aeruginosa is a major cause of pneumonia in immunocompromised patients and people with lung disease. Due to its high level of antibiotic resistance, it is becoming increasingly difficult to eradicate the infections it causes and, as a result, the WHO (World Health Organization) considers the development of new antibiotics against this pathogen a priority.

One of the factors that make P. aeruginosa lethal is the Type VI Secretion System (T6SS). This secretion system is assembled within P. aeruginosa, and, upon contact with other cells, uses a contractile molecular mechanism to inject toxins into them. Although the last decade has seen great progress in our understanding of the P. aeruginosa T6SS, and its relevance to bacterial competition and pathogenesis, the identities and functions of the vast majority of toxins secreted by the T6SS remain unknown.

A research team formed by scientists from the Institute of Biophysics (CSICUPV/EHU), the Jaume I University, and the University of Seville have identified the effect of Tse5, one of these toxins secreted by T6SS, on intoxicated cells. Tse5 causes cell death in other bacteria in its environment. The study, which was recently published in the prestigious journal Communications Biology, reveals the mechanism of action of Tse5. The toxin is able to depolarise the membrane of intoxicated cells. To do this, Tse5 forms ion-transporting pores. Membrane potential regulates a wide range of essential cellular functions; therefore, membrane depolarisation is an effective strategy to compete with other microorganisms in polymicrobial environments.

This discovery may have an impact on future antibiotic development. According to David Albesa, “The development of new antibiotics can be significantly facilitated by a better understanding of the biology of the causative agents. Thus, understanding at the molecular level how Tse5 attacks the membrane could help to develop innovative strategies to combat pathogenic bacteria”.

Link to the scientific publication: https://rdcu.be/cY1r8