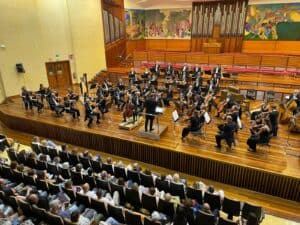 The Arantzazu Festival continues with a Lyric Concert to be held at the Sociedad Filarmónica de Bilbao -C/ Marqués del Puerto, 2- at 19:30h this Friday.

The aim of this charitable initiative is to facilitate access to gene therapy treatments for children suffering from rare diseases that until now had no hope of a cure and now do.

Leading the show, organised by the Columbus Foundation, will be the maestro Ramón Tebar who, as well as conducting, will play the piano, accompanying the soprano, Rocío Pérez and the baritone, Damián del Castillo.

The programme includes arias and duets from the Italian and French operatic repertoire by authors such as Verdi, Bellini, Mozart and Puccini, as well as pieces from zarzuelas and popular works by composers such as Moreno Torroba, Giménez and Barbieri.

The concert that inaugurated the Festival took place on Thursday 8th in Donostia at the Orchestra’s headquarters. It was the replica of the concert that will take place at the closing of the festival in the Basilica of the Sanctuary of Arantzazu, next Saturday 10 September at 19:00. In addition to the aforementioned artists, it will feature the Euskadiko Orkestra, the Bilboko Korala Elkartea and the cello soloist of the Orquesta Nacional de España, Ángel Luis Quintana. Fauré’s Requiem is the main feature of this concert, which is completed with Madina’s Aita gurea (Our Father), Ravel’s Pavane, Bruch’s Kol Nidrei, and Fauré’s Pavane.

“These performances are in line with the Columbus Foundation’s international concert tour, which is characterised by: great figures of classical music, emblematic venues and an extraordinary cause that radically changes the lives of children with rare diseases”, says the founder, secretary and patron of the foundation, Javier García, better known in the region for also being the CEO of the biotech company Viralgen.

Tickets for the Lyric Concert can be purchased at this link. A “FILA 0” has also been set up for donations. The accounts available for this purpose are:

Fundación Columbus has been organising international concerts of the highest level since its creation in order to raise funds to fulfil its mission. Places such as Washington DC, Moscow, Valencia, Barcelona, Madrid, Seville, Santiago de Compostela, San Sebastian, North Carolina and many others have enjoyed masterful performances in emblematic venues. Thanks to these initiatives, dozens of children with rare diseases have been treated with Advanced Therapies, radically changing their lives.

The Columbus Foundation was established in Valencia in 2017 with the aim of developing and making accessible medical innovations for oncological treatments and rare diseases of monogenic origin with a special focus on children. In 2019, the Foundation opens its doors in the United States through the Columbus Children’s Foundation.

The Foundation counts on culture as an ally to disseminate its activity and help raise funds. It programmes charity concerts with unique characteristics in major cultural and musical venues, featuring top-level artists. These events help to finance the medical treatment of
medical treatment of minors in specialised centres and support for their families. In March 2021, it launched the Objetivo10 programme, which aims to develop effective treatments for ten rare diseases in just ten years.