The Highly Cited Researchers list, published annually by the British company specialising in the analysis and compilation of data from scientific and academic research, recognises the most influential researchers at a global level according to the number of references to their work made by the scientific community

Armand, who also appears again this year in Stanford University’s “Ranking of World Scientists” as the leading researcher in the State in the field of Energy, leads CIC energiGUNE’s research in the field of the solid-state battery for the electric vehicle of the future 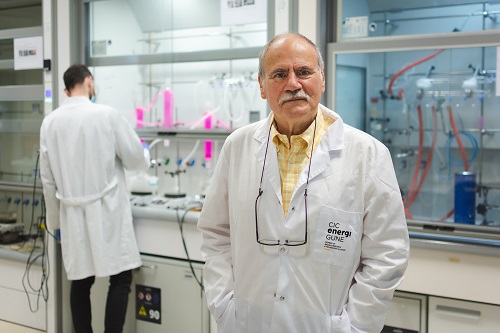 Michel Armand, a researcher at CIC energiGUNE, a leading Basque research centre in energy storage specialising in batteries, thermal energy solutions and hydrogen technologies, and a member of the Basque Research & Technology Alliance-BRTA, has once again been included in the prestigious “Highly Cited Researchers” list, which is compiled annually by the company Clarivate Analytics – specialised in the analysis and compilation of data from scientific and academic research – with the researchers who have the most cited works by other researchers during the same year. In addition, Michel Armand has once again been included in Stanford University’s “Ranking of World Scientists” -together with 5 other CIC energiGUNE scientists- as the leading researcher in Spain in the field of energy and the seventh in the world.

“Appearing year after year in the main lists of reference reports of the international scientific community is within the reach of very few people”, said Nuria Gisbert, Director General of CIC energiGUNE. “Michel Armand’s presence on the Clarivate list is excellent news and a tangible sign of the enormous scientific value he possesses”.
The list of highly cited researchers is extracted from the most cited articles -which rank in the top 1% of the most cited articles in their field of study during the same year- in the Web of Science™ citation index. This year, Clarivate recognised 7,225 awards to researchers from 69 countries and regions, awarded to 6,938 individuals (several of whom received recognition in more than one field).

Michel Armand’s presence once again in Highly Cited Researchers is in line with the recognition he has received in recent years. Stanford University considers him to be the world’s leading researcher in the field of energy, and he is included in its list of the 100,000 most important scientists in the world. In fact, he is considered the “father” of solid-state batteries and the “ideologue” of many conventional lithium-ion technologies.

Professor Armand holds several scientific awards such as the Volta medal in 2000, the Galileo prize in 2010, the Aymé Poirson prize in 2012, and the Catalan-Sabatier prize in 2016. He also holds honorary doctorates from Deakin University in 2006 and Uppsala University in 2016, and last October he was distinguished in Atlanta with the “Fellow of the Electrochemical Society” award. He is also the author or co-author of 416 publications in international journals, 295 conference presentations, and 200 patents filed or pending, and has supervised 30 doctoral theses, three of which belong to the University of the Basque Country UPV/EHU.