The headquarters of the Basque centre in the Alava Technology Park hosted the launch meeting for this project, in which 12 partners and one affiliated entity are participating with the aim of promoting a new sodium-ion cell technology that will enable them to achieve an energy density comparable to that of power batteries but with greater performance in terms of power and cyclability

CIC energiGUNE, in addition to taking on the coordination tasks of MUSIC, will provide knowledge in the development of materials and prototyping, so that the project will open the door to the manufacture of sustainable sodium-ion cells 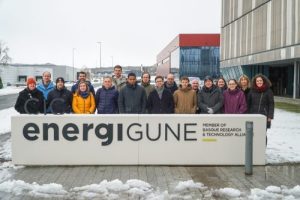 CIC energiGUNE, a leading Basque research centre in energy storage specialising in batteries, thermal energy solutions and hydrogen technologies, and a member of the Basque Research & Technology Alliance-BRTA, has hosted the launch meeting of the MUSIC European project at its headquarters in the Alava Technology Park, which aims to manufacture high-performance electrochemical storage systems based on sodium-ion technology. The meeting, which began yesterday and ended today, brought together in Vitoria-Gasteiz representatives of the 12 partners, including the Karlsruher Institut Fuer Technologie (KIT), the Centre National de la Recherche Scientifique (CNRS) and BCARE, among others.

“This project aims to respond to a specific need in the field of electrochemical energy storage,” said Jon Ajuria, Principal Investigator at CIC energiGUNE for the MUSIC project. “We are going to open the door to a new technology in the field of sodium-ion that is capable of making the energy density of these devices similar to that of power batteries, but with very short recharge times – a few seconds – and with a very limited loss of efficiency,” he said.

The MUSIC project also incorporates highly demanding criteria in terms of sustainability and respect for the environment. In this sense, the development of sodium-ion technology will avoid any use of potentially harmful substances, and will only produce new advanced electrodes based on new carbonaceous materials and binders of a biopolymeric nature in combination with green electrolytes that are sustainable by design.

The consortium will also develop new manufacturing processes and industrial value chains by developing a new presodiation approach, transversal to other battery technologies such as solid state batteries. This will enable access to a low-cost solution that facilitates the industrialisation of the technology.

In addition to coordinating the project, CIC energiGUNE will make an important contribution to the execution of the project with its extensive knowledge in materials development and cell prototyping. In fact, the Basque centre has once again been recognised by the EU as one of the leading players in these fields. “Our calling card, which is at the very origin of the project, is the possibility of scaling up and prototyping this technology,’ recalled María Arnaiz, a researcher at CIC energiGUNE and member of the MUSIC project team.
In this context, the Basque centre will play a crucial role in the development of the synthesis and characterisation of the active materials, through new ‘ad-hoc’ designed carbons with optimised properties for use as electrodes in hybrid sodium ion capacitors.